Frida Kahlo: Moses – and the secret teaching of inner resurrection 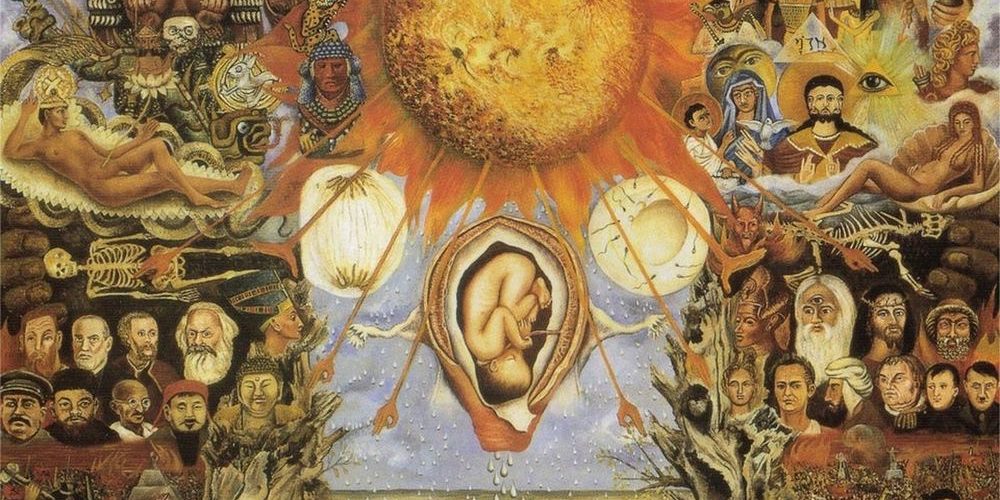 Frida Kahlo had a deep inner understanding of esoteric knowledge, which in her days was almost exclusively taught in the highest ranks of the spiritual secret societies of that time.

In my article on another picture of Frida Kahlo, I already wrote of a spiritual resurrection ceremony that was probably celebrated by most major cultures for many millennia before it was banned for political reasons by the world’s major religions.

A society in which a large part of the people has awakened spiritually was hard to imagine for the ruling guild at that time like today, because this was accompanied by the loss of all control over the subjects. Where would we get if almost every zealous spiritual disciple could get the full awakening of the Higher Self, enlightenment and Becoming-of-God with some guidance and some proven techniques in this lifetime?

Yes, what would our world look like today if only 10% of humanity were fully enlightened? Maybe then, we could actually experience “paradise on earth”.

This would be unthinkable for the powerful! For this reason, many deep wisdoms were literally erased from our today’s major world religions. The famous Council of Constantinople in 553, for example, became known in our latitudes when the doctrine of reincarnation was banished from the Bible.

Fortunately, the spiritual teaching of inner resurrection was never completely extinguished. We have old Gnostic scrolls of parchment and clay tablets, valuable finds from the Knights Templar and traditions of the early Freemasons and Rosicrucians (although it seems that these secret societies have forgotten their highest initiation levels today).

And we have art! Like Leonardo da Vinci or Michelangelo, Frida Kahlo also used her talent to hide secret spiritual messages in her art.

And with this late masterpiece (1945) by her, I don’t know where to start with the many symbols!

In the middle of the picture, we see a fetus floating in the sky, which was obviously created by the almost overpowering sun (the inner light?) and grows up in a womb. This uterus’ ovaries appear to grow sideways to the trees, as if they were meant to connect with Mother Earth.

Below, her husband Diego Riviera can be seen as a newborn child with a clearly recognizable third eye, a symbol for the fully awakened Higher Self. The child swims in the cradle (or is it a sarcophagus?) on the water and reaches the nearby bank.

Green trees grow here, but there are also a few particularly old and gnarled tree trunks that certainly do not accidentally indicate a wooden cross (left) and a praying monk (right).

We also see huge crowds on the left and right. A monkey can be seen in the first row. Should this show how most people follow the herd instinct and with it the more animalistic goals? On the left, they seem to start a revolution, on the right, they worship idols raised on statues.

Below, and therefore at the very front of the picture, on the left we see a hammering man (building something?), whose body was painted in two colors (sign of duality). In parallel, there is a milk-giving mother on the right side, and she too is painted in two different halves.

Above the sky of the two crowds, we see a total of 20 important personalities from our contemporary history, including Buddha, Karl Marx, Jesus Christ, Mahatma Gandhi, Adolf Hitler, Napoleon Bonaparte, Julius Caesar and Alexander the Great.

What do these personalities have in common? Well, they certainly knew pretty well the deepest esoteric secrets in the world!

Yes, even Adolf Hitler was known to search for the Holy Grail and more, to increase his power. And Alexander the Great founded the city of the same name, Alexandria, in which not only a gigantic library of spiritual writings was built, but also certain resurrection rituals were held on a large scale.

These resurrection ceremonies were spent in complete darkness for several days, mostly below ground, in a cave, underground chapel, or in the middle or under a pyramid.

The deep black darkness and the close contact with Mother Earth can convey a deep feeling of security, as the soul felt last in the womb. And, as our scientists have found out by now, staying in the darkness for some days also strongly fires up the production of the body’s own messenger substances.

In this natural, automatic process, the glands deep inside our brain begin to produce 5-MeO-DMT after about six to eight days, which is then converted to pure DMT (the “molecule of consciousness”) between the ninth and twelfth day. DMT is also the main active ingredient in Ayahuasca.

Anyone who had this experience in a dark retreat, often reports of a bright glow from inside the head. Even the halos in the old images of the saints suddenly make sense! Because DMT can also give us the experience of complete unity with Everything that Is.

But back to the picture by Frida Kahlo: Above the famous people I see a dark cave on both sides with the protective hand of Mother Earth (see Frida’s picture: The love embrace of the universe). In the two caves are skeletons that show the symbolic death of the former selfs.

Because nobody died here: on the left, we see human bones, but above that a naked and spiritually awakened man, as the open lotus flower in the solar plexus, the radiant glow of the light body and the golden crown with a halo undoubtedly want to tell us.

The skeleton of an animal is shown on the right. Above this a naked woman who, while not yet completely holy from this resurrection ceremony, has at least regained her inner femininity, because she lies visibly satisfied in a huge shell.

This woman seems to have confronted her primal animal forces and also her deepest fears (devil figure in the fire) during the ceremony. Perhaps she will soon do another inner resurrection ceremony and then go a few steps up the Jacob ladder of enlightenment until one day she also becomes a saint …

At the top of the picture we see the religious symbols of the early American and Asian philosophies on the left and mirrored the Christian, pre-Christian and Egyptian symbols on the right. Here, Frida gives us the hint that deep spiritual wisdom is often hidden behind the religious symbols, which only the initiated (or those who endeavor) can recognize.

Perhaps Frida’s initiation path also went beyond the symbolism in old religious works of art. As an exceptional artist, she definitely had a feel for it, and because of her almost lifelong illness, she certainly had the time and ease to look behind the outer facade of things.

There is a commentary on this painting by Frida Kahlo. She would have thought of the picture as an interpretation of Sigmund Freud’s book: Moses and Monotheism. After reading the book a second time, however, she noticed that Freud had meant something quite different from what she had already finished painting. It remains open whether Frida with this explanation only wanted to distract from her true sources of knowledge for this picture …