Frida Kahlo: The Love Embrace of the Universe 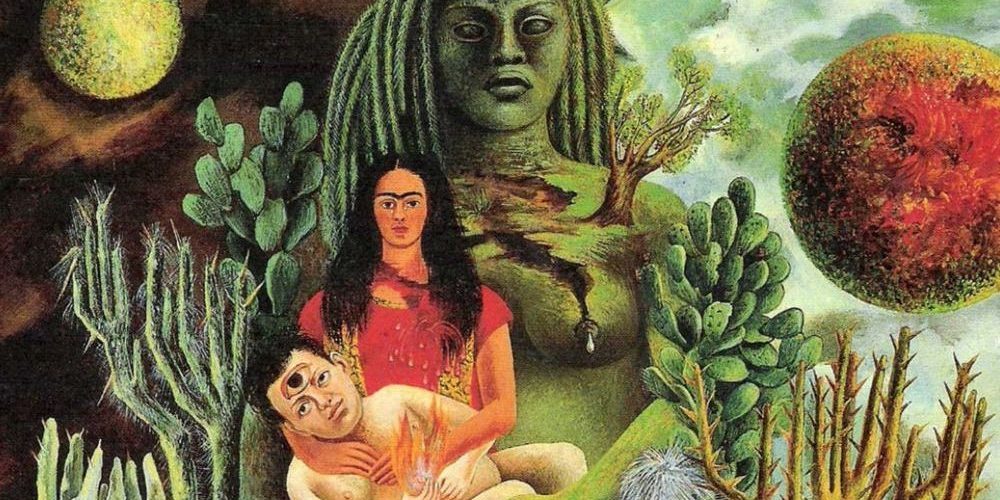 A mystical reinterpretation of a masterpiece by Frida Kahlo

Frida Kahlo was a lot, an artist and, I’m pretty sure, she was also a very special person. She had seen a deep, inner understanding of the universe, especially seen from the emotional and energetic side.

As you can quickly find out by deciphering the rich symbolism in her pictures, Frida probably had quite extensive insights into yoga, spirituality and magic. In those days, this was much more troublesome and difficult to obtain than today with our seemingly unlimited access to knowledge on the Internet.

The picture shows, unsurprisingly for Frida connoisseurs, herself. This time, she is the Holy Mother, not unlike in a typical picture of the Virgin Mary. By the way, this type of image was known not only to the Christians, but also to the Babylonians, Egyptians, Greeks and apparently all other important ancient cultures.

They all used these pictures and statues to show a deep inner truth of the universe: when we paint a Holy Mother on the canvas, behind the mere visual image of a beautiful mother there is above all the symbolism of the Divine Female in the universe, which can be found, for example, in our concept of Mother Earth. And from her comes the second embrace in the picture.

Now, Mother Earth is a concept of the Divine Female, but with this name we also mean the material part of this world, which is of course subject to the known laws of nature, and in a world of polarity always has a female, as well as a male part.

For this deep truth, the last embrace can be seen in the picture, which comes from the universe, meaning the spiritual-energetic world. And on this level, all parts are divided into dark and light, moon and sun. Because on this level, the laws of polarity prevail. It always takes two poles to create an energetic force in the astral worlds.

So, Frida in the image of the Holy Mary shows her love for her husband who has awakened to spiritual perfection (third eye on his forehead).

Regarding to this, a very exciting book comes to my mind: The Lost Art of Resurrection: Initiation, Secret Chambers, and the Quest for the Otherworld. Freddy Silva describes in this book, how apparently all great cultures of the past knew of a spiritual resurrection ceremony, which was practised in many places in underground temple chambers, chapels, catacombs, sacred rooms in the middle or under the pyramids or also in extensive caves.

These spiritual ceremonies are helt for several days in complete darkness. Traditionally, mostly underground, in order to have a particularly deep contact with Mother Earth during this powerful experience.

Mother Earth has produced our skin, organs and bones and takes them back again when our physical body is finally layed down.

And since the energetic-spiritual worlds are based on polarity, in this so called “spiritual wedding ceremony”, you harmonize your own inner male and female parts.

You get to know, and maybe also love, your inner Sun God and your inner Moon Goddess, so to speak…

From the perfect union of one’s own inner parts grows the birth of a spiritual child, the complete spiritual awakening, the enlightenment, the becoming of a God.

Is that what Frida wanted to indicate with the spiritual eye on her husband Diego’s forehead? Because the “living resurrection” ceremonies have been practiced for this very reason for many millennia.

The tremendous power found in the sacred resurrection ceremonies obviously produced a number of very extraordinary personalities from ancient times. But I will report on this shortly in an article about another very symbolic masterpiece by Frida Kahlo.