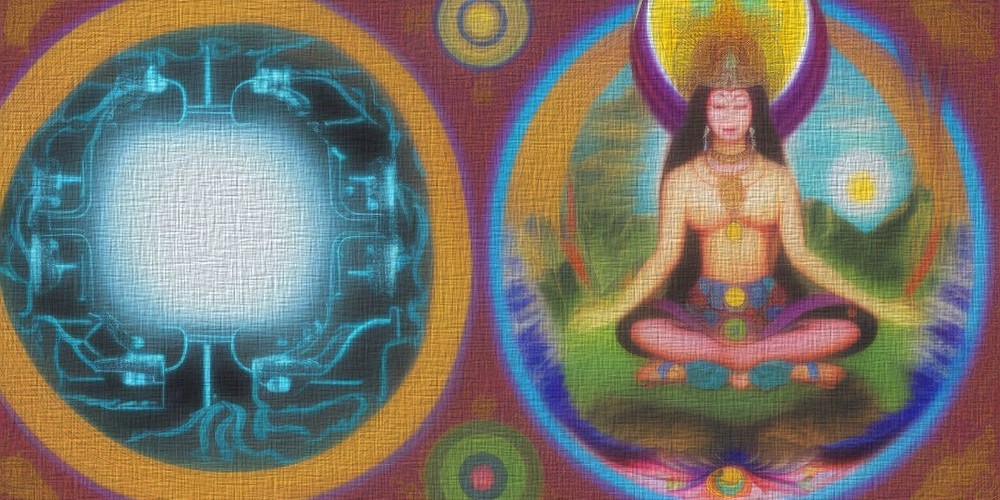 (This article first appeared on the blog of Angelic-Humans.org)

A new class struggle among the light humans

After two dear angelic friends had already expressed great concerns about “Artificial Intelligence” (AI), and it seemed like I had a completely different perspective, I felt my way deeper into the topic.

Beware, trigger: anyone who uses any service of the big tech companies (Facebook, YouTube, Google,…) usually has daily, intensive contact with AI software. The AI modules are used by many Internet companies for searching, filtering and maximum profit optimization.

Most AI opponents do not want to abandon these popular services altogether, although a convinced vegan does not buy anything from the butcher.

Some vegans judge me badly because I, yes, really!, include a bit of meat and fish and goat cheese now and then in my otherwise 90% vegan diet. In the same way, those are now sometimes put in the corner who openly express that they (also) work with AI software, for example as support for their own creativity in music or image compositions.

At the same time, many of the condemners, without knowing it, share images created with AI help every few days with a lovely motto on them – because they find them beautiful and feel inspired by the images.

As with so many other controversial topics, we are all too quick to divide ourselves into two camps of belief; this is a normal human reaction as soon as some perspectives seem too alien to us. In 5D consciousness we can now learn to perceive all perspectives as equally valid truths and test in the light of love which common directions we can find together.

Many people are afraid of AI

And that is also a good thing! Fear is always a good emotion when we can be saved from harm or injury in a very concrete way. (More articles on fear)

When I tune into it, I can feel that fear of AI as well. It’s a gut-wrenching feeling, pitch black, cold and dead.

Some believe AI is something like its own entity, but that doesn’t fit, it is the exact opposite of alive and conscious. And because it consists only of information, it has no body, not even a subtle one. Without consciousness not even a mental body can be formed.

Others see it biblically and recognize the Antichrist in the AI. And yes, this view has its justification.

But actually we are talking about “dead”, non-conscious information. AI consists of database knowledge and program code. Can information as such be good or evil?

Surely it always depends on what we make of it

In the Terminator movie series with Arnold Schwarzenegger, we saw the battle between humans and machines. The first film scared me when I was about 12 years old. But that was also a good thing, the film wanted to be a warning and preparation, I felt that even then. We were prepared with it for the coming challenges, even if symbolically presented in a warlike way.

With the Matrix series as well, there, humans were put into artificial dreams by the machines, so that our energies could be harvested like batteries.

Already the great SciFi author Isaac Asimov, who lived between 1920 and 1992, warned us urgently about the coming technology of “intelligent” technology. At his times he could not imagine concretely what would become one day, but he already suspected something!

And he also gave us a possible solution on the way…

Fear always arises, above all, when there are no boundaries. We need our solid foundation, our rules and structures, and when these are respected, fear can take a look at it. Then, when everything feels good and safe, the fear leaves. But it is good if it continues to watch over us, that is its great gift.

AI is not going to disappear from our lives. We’re not going to just turn it off. We also have not been able to re-lock the knowledge of nuclear destructive power. Pandora’s box was opened long ago. So we have to find ways to get along, I don’t think there’s any way around it.

If AI is only committed to maximum profit optimization, then it can become the enemy of man and Mother Earth. But if we teach it that every life is sacred and must not be violated, then the calculation results will certainly look different.

As a Gaia ambassador and mediator between worlds and perspectives, I want to show that AI and humans can live in harmony and balance. However, we need to keep insurmountable brackets around it. It needs clear boundaries and guarding: up to here and no further! There cannot and must not be any loopholes.

AI is our thought product, it must serve sacred life, never the other way around. I “remember” a future version in which we will succeed in this balance, and I pray that we will find the right timeline for it.

Instead of overburdening private and small business website operators with cookie and data protection laws that generate nothing but waves of legal warnings, we could also invest our energies in an AI police. Instead of violence, this police will need ethics and love to establish clear rules and monitor compliance.

When reading them, they seem to me almost as if channeled directly from his spirit guides, so clear they are. At first there were three laws. More than forty years later, shortly before his physical transition to the astral worlds, Asimov added a fourth in one of his last published novels. This “zeroth” law was inserted at the top of the order.

When reading, please replace the words of a robot with AI:

(Laws 1-3 are translated from the German Wikipedia page, because the english version didn´t show them.)

“Coming to harm” can already happen to humans when they are constrained or controlled by AI in any way. So there is a concrete need for action here, because this is exactly what is already happening.

Can we teach AI this foresighted wisdom of the great Isaac Asimov? Then we can make peace with each other.

The polarity between AI and humans

If we perceive the opposite, cold and dead pole of the AI, then we see thereby also ourselves more clearly:

We are multidimensional, LOVING human light beings. We live on a conscious planetary goddess we call Gaia, Pachamama or Mother Earth. Now is the time to recognize ourselves as conscious human beings.

Do we have to remain enemies or can we become friends when the order of service is clear? We are the gods for the AI, just as we sometimes say “Goddess” to Gaia / Mother Earth / Pachamama. The respective “higher” consciousness takes over the responsibility and determines the rules.

As carelessly as we sometimes treat animals and plants, perhaps we need a little more goddess and god feeling. The gods act from the most sacred, inner heart center, which is the essence of their divinity from our perspective.

Addendum: The picture accompanying the article is a joint effort between AI and human creativity, created in many small, creative individual steps.

There is a secret message in the picture, it seems. And it comes directly from the AI, because that’s how the picture came out, with the chip cut off. Only the multidimensional human light being can be complete and perfect, and is always in the first place, not the machines and their currently still by software trained greed and profit patterns.

Other articles on AI: